Ride or Die With Their Fantastic New Album


As we've discussed in a prior review, you don't need to try to re-invent the wheel in order to captivate us musically. We here at RNRMF have always respected the hustle. The bands that keep pumping it out, with a DiY attitude and relentless work ethic. One such band is the rather glorious and intense NY/NJ hardcore-punk-thrash band The Car Bomb Parade who granted us an exclusive preview for their newest release, "Opiate For The Madness" released today. 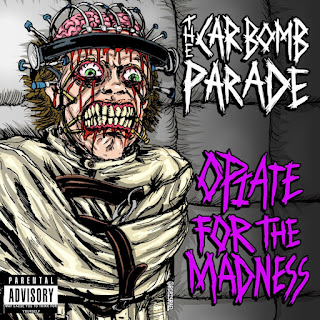 Behind it's throwback-feels inducing cover (sporting artwork by the highly regarded Rob Israel), The Car Bomb Parade defy category and transcend what you'd expect from any group simply titled under Hardcore, Punk or Thrash. Yeah, we know- saying that in itself is a bit of a cliche that reviews will often throw out there- but we mean it. Take, for example, the gorgeous track "Our Brother"- it opens with what seems to this reviewer western-tinged violin (fiddle?) and acoustic guitars, never once seeming to appear for camp value but, instead, tinged with sincere melancholy. It's as if The Car Bomb Parade know that, fuck it, there ain't nothing weak about sentiment and displaying it broadly is as bad-ass as screaming out your sorrows. It even ends in what sounds like a Mono capsule, the power-chords and frentic drumming fading out and taking you back into another head space, all the more intense as the previous one but for different reasons.

This is an album with catchy hooks and ear-worm sensibility to go with the Hardcore. "Original Hardcore Mentality" has a title that could be read by some as tongue-in-cheek- but the Car Bombers never once let you think they're taking any of this for granted. This track is undoubtedly a live killer and possible single release.

"Live For This, Die For This" is a call-to-arms that has an infinite shelf-life as both a Hardcore and a Punk anthem. If the scene doesn't rally around this song as a theme song I'll be seriously disappointed- far from the self-indulgent whining I've barely tolerated from other Hardcore bands, this track is downright fuckin' inspiring.

"their game is rigged/it's always been/it's our time to win"- While other artists are content to cut their arms and lament the state of the world that is seemingly against them, The Car Bomb Parade merely shrugs that off and says, fuck it, we're in this together, let's fight back. I can't tell you how refreshing that is- and, quite frankly, the underground music scenes needs more of that in these depleted times. There used to be a sense of community regardless of what sub-genre of Rock N' Roll you were into- whether it was at a Goth club or a Punk show in a fire hall- there was a sense of "us", where people could connect and feel part of a greater collective. The Car Bomb Parade brings that spirit back and it's at once inspiring and refreshing and, yes, distantly familiar. This is an album with all killer and no filler that is well worth seeking out. The Car Bomb Parade are Rock N' Roll, Motherfucker!

Opitate for The Madness is available on iTunes, Spotify, Amazon, Bandcamp etc.