Music snobs and Monkees aficionados alike often cite the made-for-tv group's "Headquarters" as the first and most 'real' Monkees record and they're not wrong. Technically. That album was the first one created by The Monkees themselves after loosening the corporate mandated chains snapped upon them by Don Kirshner and the suits at Screen Gems. That saga, genuinely interesting and unprecedented, has been covered at length on a variety of sites and by The Monkees themselves in interviews over the years so we don't need to go into that today. As it is, we're writing about the purest and rawest Monkees album both in terms of performance and in terms of Monkees musical participation: The Monkees Live 1967, which wasn't released until 1987 at the height of MonkeesMania Wave 2. 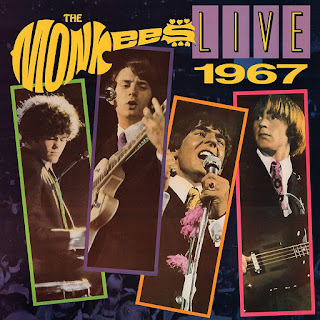 Some context (even though we promised we wouldn't go into it): After two widely successful albums boosted by the success of the television show, The Monkees had sought creative freedom and clashed frequently with "The Man With The Golden Ear" Don Kirshner. To make a long story short, The Monkees inexplicably won out and were able to handle largely all of the writing and playing on their seminal effort "Headquarters" released on May 22nd 1967.

It's here that I'd like to again emphasize how rare and truly bizarre The Monkees are as a musical entity. It's taken for granted that they were initially hired simply to be actors on a TV show about a band; while all four had significant musical prowess- Michael Nesmith had already written songs for the Paul Butterfield Blues Band and the hit "Different Drum" for Linda Ronstadt at that point- they basically were meant to be actors and their output was basically to be a soundtrack to drive the television show. These were four distinct voices that, in real life, would never have been in a band together.

So it's now that I become the first writer to connect Brian Eno's work to The Monkees themselves which will, hopefully, provide greater context to the weirdness of this entire affair: Eno had pioneered something called Oblique Strategies that had borne great results when working on David Bowie's famed Berlin Trilogy. I'm simplifying it a bit, but the basic gist of Oblique Strategies was to put artists in an unusual situation for them to see where it would take them creatively and challenge their conceptions for what they thought they could or could not do. Therefore, a jazz drummer might choose an index card given to him by Eno that instructed him to play as if he had only had one arm and was playing on a moving train; a rock guitarist might be instructed to only play on one string and think in Bluegrass terms; while it may appear completely random and bonkers, it begat interesting things that otherwise would not have occurred musically. After all, musicians are seeped in ritual and practiced in the genre and area in which they are most comfortable and most personally invested in. It's incredibly unique that those musicians would willingly attempt other things to produce commercial results.

By that method of thinking, The Monkees as a live band are a literal manifestation of the Oblique Strategies. Micky Dolenz was a former child actor and singer who was cast as a zany drummer and then literally learned the drums less than one year before he began touring in front of thousands of fans. Though he became more proficient and comfortable, it remains fascinating to hear his playing on 1968's "Circle Sky" for example- his choices and instinct are remarkably different from what a "real" drummer would think to do- but this is part of what makes it so interesting and so enjoyable. Davy Jones was a British stage and show-tunes singer who couldn't have been more out of step with Mike Nesmith's country-blues rooted material if he'd tried. The Monkees should not have been playing live in this capacity, all things considered. That they did- and pull it off- adds a whole other layer of enjoyable madness to their seriously vast output. 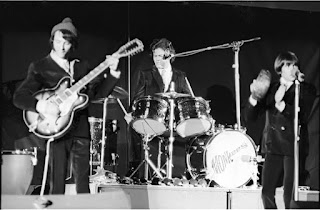 MonkeeMania had reached a fever pitch by 1967 and it was evident that a touring show would have to occur. Peter Tork, the most musically proficient of all The Monkees would bring his band mates up to speed by simplifying the hits most fans would expect. It's these rollicking, sloppy-in-a-good-way versions which make up the Live 1967 album. And really, this record is garage as fuck. While there's a few tracks where the individual Monkees are backed up by their opening band as they go through a solo number, we'll be concentrating on the twelve tracks performed by the band themselves.

Mike Nesmith generally sticks to thrashy, chugging chords on most songs and his interpretations of more capable guitarist's licks are seriously almost punk-like in fashion. (We'll get to the most punk member of The Monkees shortly.) Micky Dolenz's singing- legitimately underrated in the pantheon of Rock Singers- is a bit muted here for the very logical reason that he's also playing drums at the same time, simplistic and bass-snare-bass-snare as possible. Tork is the real glue on all of these tracks, wisely sticking to organ on a few numbers more to cover complicated riffs than for any lack of chops with the bass- and is clearly enjoying himself the most if his frantic and charmingly off-key backup singing is any clue.

But what really strikes you is the real highlight of the album for this writer... Davy Jones's amazingly fucked up bass playing. And I mean that in the best way. It's most evident on the live take of "I'm A Believer" (linked at the top of this article) and was so ridiculously flabbergasting that I wondered why they had Davy playing at all rather than just handling percussion. (Jones didn't play bass that much at all but is on this particular track.)

I went to listen to it again with headphones and it's so amazingly bad but genuine and soulful that it ends up being endearing and bad ass all at once. Jones started chugging along with the beginning of the song with all the earnestness of a beginning student (you can almost feel him in concentration, remembering the frets he had practiced), the rigid playing evident, the open note trailing off and hinting at the relative inexperience on an instrument. As the title of this article states, it's Davy Jones doing punk bass a decade before Sid Vicious did. It's friggin' great.

So, for Monkees purists, the Pre-Fab Four do a capable and entertaining job pumping out the hits on Live 1967 and it's definitely worth a reevaluation by fans and critics alike. (For the record, while all four Monkees play on most every Headquarters track, it's producer Chip Douglas, formerly of The Turtles, on bass duties on much of the songs. Live 1967 allows for only The Monkees in a live setting, with only themselves to lean on.) Highlights include Dolenz's "Randy Scouse Git" and a fantastic and long version of "(I'm Not Your) Steppin' Stone" with what only feels like a garage-level attempt to imbue the song with some Hendix-esque undertones. Tork throws himself into it at the end, his voice cracking, with all the earnestness of someone playing in The MC5. If you're looking for a pleasing and mildly interesting listening experience some afternoon, seek this out. It's Rock N' Roll and not one naysayer can tell me otherwise.