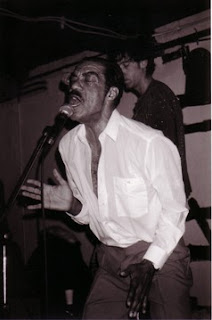 In a dire possibility of terrible omens, the very day that this site has launched has word trickled in that R&B legend Andre Williams passed away yesterday, Sunday March 17th, 2019 at the age of 82.

If you don't know Andre Williams then it's a severe understatement to say that you should. Or at least have a passing familiarity with his vast body of work and significant influence, an influence which stretches from Soul to R&B to Rap to Punk. This is a man with dual nicknames of "Mr. Rhythm" and "The Black Godfather" and who- at the very least!- co-wrote "Shake A Tail Feather" therefore establishing his complete and utter Rock N' Roll bad-assery for all time.

Of course, there's much more to Andre Williams then those passing mentions. The man himself was born in Alabama on November 1st, 1936 and largely raised in poverty by his Aunts. As a teenager he left Alabama and landed in Michigan and eventually became the lead singer of then-signed The 5 Dollars. In 1956, Williams co-wrote "Bacon Fat" which made the Top 10 on the US Billboard R&B Chart in 1957. William's wry pseudo-spoken word style was a precursor to Hip-Hop and his healthy use of double-entendres may have hearkened back to influential blues artist Peetie Wheatstraw, but the greater whole of his work displays a singular and decidedly unique voice. Again, we're discussing a man who wrote or co-wrote such tracks as "Jail Bait", "Sweet Little Pussy Cat", "Cadillac Jack", and the tragically seldom covered "Humpin' Bumpin' and Thumpin'" all for a variety of budget and Black-only labels throughout the 50s', 60s', and 70s'.

Homeless and struggling with addiction throughout much of the Eighties, Mr. Williams recovered and made a cult comeback of sorts by the mid-nineties and began the following decade by collaborating with garage rock bands like Detroit's Demolition Doll Rods. By 2012, he was inducted into the Michigan Rock and Roll Legends Hall of Fame and had lived to see a small but growing audience for his work in Europe, where he toured frequently in his later years.

A singer, writer, producer and all around set apart personality, Andre Williams died from colon cancer which had spread to his lungs and brain. He was reportedly still eager to write and record again. Mr. Rhythm casts a long shadow due to his prolific output and his extensive and genre-hopping catalog is worth pursuing online. We pay our respects to The Black Godfather and a man that Lux Interior once summed up as "Andre Williams makes Little Richard sound like Pat Boone."