1. Maybe The Wheel Doesn't Need Re-Inventing: The Greatness of The Venus Flytraps 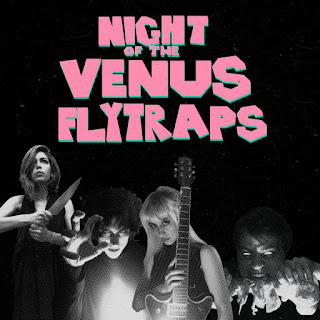 From Cleveland comes The Venus Flytraps... and, y'know? There's gonna be tropes and sounds and vibes you've undoubtedly seen and heard and felt before. From horror punk chords to b-movie cult ethos and imagery, that familiarity is bound to register with you the moment the glorious Flytraps show up in your orbit. But they're a delightful satellite destined for endless trips around garage rock's ozone layer and well worth your digital currency... we respect the hustle here on Rock N' Roll, Motherfucker and The Venus Flytraps are puttin' out RECORDS, Baby. They seem prolific and eager to be heard so let's discuss today's entry in the ongoing library of bands you need to be hearing:

Night of The Venus Flytraps is an incredible entry-level record to the wild world of the V.F.s' (as I hope they don't mind me calling them here), 11 solid tracks- ok, one of them is less than a minute long but it's not out-of-place and retails the killer not filler vibe- and, besides the aforementioned familiar but cool elements of pulp fiction and old horror film trappings there's solid shit here- choruses both accessible and catchy ('Cherry Slush'), really great mid-tempo punk blues torch songs with harmonica, natch ('Caught in Your Web') and a bunch of other tracks that really reinforce the notion that The Venus Flytraps are undoubtedly a really fucking great live band. (I haven't seen them- yet- so the fact that their material lends itself to this thought again solidifies that this is a good collection of songs.)

"A cornucopia of sex and horror" is how The V.F.s' describe themselves online and that sounds about right. These are tracks interlaced with lust and longing, perfumed with the musk of a Hammer Horror film and painted over with pure garage rock intensity. We wouldn't cover this band if they weren't fuckin' aces. They are. If they had only out out this one long-player, The Venus Flytraps would be worth hearing. As it is, they've got a wealth of recordings online. Seek them out- they're Rock N' Roll, Motherfucker.